‘In therapy’: a marvelous Uzo Aduba consolidates the superb season 4 of the HBO psychological series

Seeing the first episodes of season 4 of ‘In therapy’ (which premieres today HBO Spain) is not exactly like traveling in time but it is like see an ancient testimony resurface, emerging gracefully from the challenge of the swing of the times. Eleven years are not in vain and in all these years the evolution of television has been impressive.

Because when this series it was released in 2008 it was something quite unheard of. A series in which each episode is two people talking. A patient and a doctor on an odyssey of going to the germ of problems. A formula that has been replicated with greater or less success and that opened a certain tendency to explore the psychology of television characters more.

In this sense, it is quite common in all these years to find series and episodes whose climaxes are that search for inner sincerity, of the mind and of understanding the mechanisms of the psyche.

That is why seeing Uzo Aduba – as the new title character of ‘In therapy’ replacing Gabriel Byrne – receiving his patients gives a feeling not only of recovering the scheme of years ago but that it is something “already seen” . Yes, this works almost like a reimagining / reboot and in this sense we know what we are going for, but this impression causes the temptation to want to ask for more of something with the structure as marked as this.

Which is not wrong. No. On the contrary. ‘In therapy’ has returned with strength and thanks to a whirlwind named Brooke embodied by Aduba. She holds the series and sells it to you herself, being the mainstay of the series with her three patients: Eladio (a brilliant Anthony Ramos), an intern with bipolar disorder; Colin (John Benjamin Hickey), a white-collar criminal fresh out of jail; and Laila (Quintessa Swindell) a teenager whose grandmother is concerned about her sexuality.

Perhaps what we can do the most is the need for each session to have some great insight or a commitment from Brooke that the next step be taken. It is in that fight between television fiction and the verisimilitude of a psychological therapy real in which the series asks for more effort in the pact of incredulity. But there is one fact to take into account and that for Jennifer Schuur and Joshua Allen (co-showrunners) somehow justifies this: the doctor herself is going through a grieving process.

Adjusting to the new times 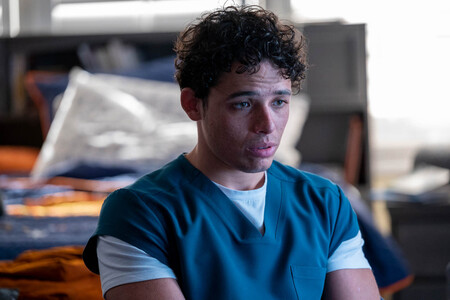 Contrary to the original seasons, the last session of the week is not strictly psychological rather, it is more of an entry into the world and the comings and goings of Brooke. This is perhaps the aspect that changes the most with respect to the above without taking into account that we have changed the protagonist and the setting.

Another is the choice of double chapter on two consecutive days, which already occurred in season 3 and which proved to be more appreciative in the eyes of the viewer than the daily episode format from Monday to Friday. Separate programming strategies, I’m curious to see how it works in the midst of so many options broadcast that we are seeing in the age of streaming.

I recognize that with these aesthetic changes, the first episode is a bit difficult to get into. Even more so when the beginning is strange, with the character of Aduba picking up the phone to a patient late at night so the next thing we see is that instead of in person, the session with said patient is via “zoom” for reasons that will be revealed.

But soon the series is taking over us and serves as a small balm in an era when the pandemic is wreaking havoc on our daily lives and our mental health. A mirror in which to look at ourselves and be able to discern how beneficial going to therapy can be.

In short, season 4 of ‘In therapy’ it is a more than welcome update of the above. Uzo Aduba is absolutely brilliant in his performance and the rest of the main cast is up to the task (when he doesn’t beat it). Something that is not trivial being a series in which basically two people are talking. You have to have a powerful cast and HBO has been completely right.