War hero, clown and useless good-natured: the story of Jar Jar Binks, the most hated character in ‘Star Wars’, and his worthy ending

It’s one of the stories most tragic from ‘Star Wars’, both in front of and behind the cameras. A comic relief created to make laugh that not only ended up causing the rise of the Galactic Empire: it also created fan anger, contempt for the creator himself and was banished into oblivion, until some have tried to put it in perspective post-ironic. . This is The Jar Jar Binks Failure Story.

In 1993, ten years after ‘Return of the Jedi’, George Lucas announced that there would be more ‘Star wars’ outside of comics, novels, children’s cartoon series and video games: officially there would be a trilogy of prequels in which it would be told how Anakin Skywalker passed to the dark side of the Force.

The fans, in an Internet that was beginning to take its first steps towards the mainstream, could not wait. Little did they know there would be a new race, the Gungans, that they would have among their ranks a clumsy character who spoke strangely and who would cause their rage five years later.

George Lucas had a positive experience with the children’s audience thanks to the ewoks In ‘Return of the Jedi’: This adorable breed, who were originally going to be Wookiees, sold tons of merchandise and starred in two movies and a 26-episode series. How not to try to repeat the play with a new character? Luke was inspired by goofy (“I know many of you will see him differently now. It’s pretty obvious, actually, but I love Goofy and I love Jar Jar,” he stated in 2015) and he decided this would be an entirely CGI character. Well more or less. 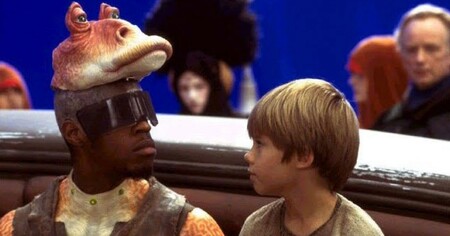 Even if Michael Jackson wanted to play it (think that there is an alternate reality in which this has happened, think about it for a moment!), in the end a Broadway actor without experience in the cinema took the cat to the water: Ahmed Best.

Best, who saw his big opportunity to break into the industry here, had to get a Jar Jar suit that cost a whopping $ 100,000, with the idea of ​​animating only the head digitally. Ultimately, the character was fully animated by CGI, giving more freedom of movement – clearly, Best couldn’t have the complexion that Jar Jar had in the final film.

The moment of the premiere

Now it has become almost a habit, with five ‘Star Wars’ movies released in the last six years but, in 1999, the darkened room with the logo and sliding letters was almost a religious experience. Little did the first viewers imagine that they would leave the cinema wondering what had just happened. And, of course, little did Ahmed Best know that he would end up considering taking his own life. 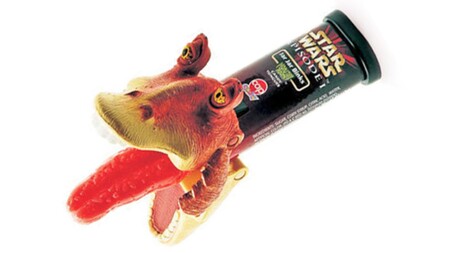 At the end of the 90s, the Internet had already become a tool of the day to day, and forums, boards and blogs began to grow: the fan felt that he had a voice, that he did not need to set up a fanzine to express his feelings and argue with other fans. It was enough to have a keyboard, a mouse and a 56k modem on hand. Hate was no longer a bad or pernicious feeling: hating was fun, it was commentable, it could go viral.

Thus, fans from half the world They charged everything they had against Jar Jar Binks. There were songs against him, flash games where he was killed … And the worst had not yet come. Many believed that, after the furious reaction after ‘The Phantom Menace’, George Lucas would decide to kill the character.

But two things happened: on the one hand, Jar Jar did like his potential audience, children between 7 and 12 years old. After all, Lucas created the character under the supervision of his own children! On the other, at the end of Episode I, the Gungans ended up accepting him again and even promoted to general. Wasn’t it logical that it would have some weight in the future?

Oops, mass did it again

For ‘Attack of the Clones’, Jar Jar’s role would be far less: George Lucas did not want to face the angry reactions again. In the movie ten years had passed, Anakin was already an adult Jedi and Jar Jar had grown up to become a delegate to the Galactic Senate alongside Princess Amidala. Until, in his absence, he has to take the floor and, of course, mess it up. But not in a funny way, stumbling on the stairs, no. Bringing down the Republic. 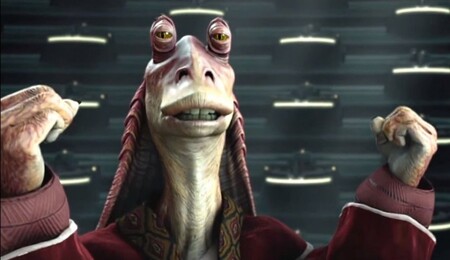 “And in response to the direct threat to the Republic, I propose that the Senate immediately grant emergency powers to the Supreme Chancellor.” Exactly: some of you may have forgotten, but Palpatine rose to power on the advice of Jar Jar Binks. In the original sketches, as a joke, George Lucas called the film Jar Jar’s Great Adventure. And what if it was. If in the first part he was hated for his attitude, in the second part he was hated for his actions. It didn’t improve things.

It is true that the ‘Clone Wars’ series restored Jar Jar dignity by making him a pro-Republic war hero, but this happened much later, when the fire of the prequels had died down. Do you want to know how Jar Jar was seen from the official ‘Star Wars’ media? Let me tell you briefly about ‘Star Wars Tales’.

‘Star Wars Tales’ was a collection of 24-issue comics in which different artists gave their vision of the universe. For example, the very Peter bagge (‘Hate’) drew six pages about Jar Jar Binks, and indie artists like Jason or James Kochalka They did their bit.

In general, a series of the most recommended. But what we were going to: in its number 20, 2004, in the waiting period between Episode II and Episode III, Tony Millionaire drew a story titled ‘George R. Binks’, about Jar Jar’s father.

In this story (not canon, of course) we were presented with the father, George (ahem), as a brave sailor who crashed on an island with his wife and son because of him. At one point, seeing his son playing with a conch shell, he decides to commit suicide. Few things will tell us more about the vision of Jar Jar at the time than the ridicule he was subjected to in the official comics themselves. Hating him was officially fun. 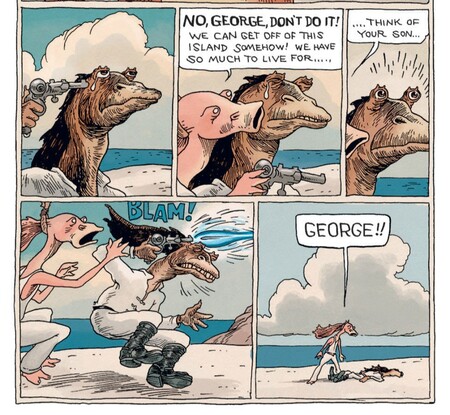 In fact, in number 24 of the same collection, Jango Fett sets up some kind of fight club and shoots Jar Jar Binks dead (although it claims to be called “Yir Yir”). As it is. Not to mention the parodies that forever destroyed the character: ‘South park’, ‘The fairly oddparents’, ‘The Simpsons’ and ‘Robot chicken’ (where Best dubbed the character again to laugh at him outright) are just a few of the hundreds that were on television and the Internet. 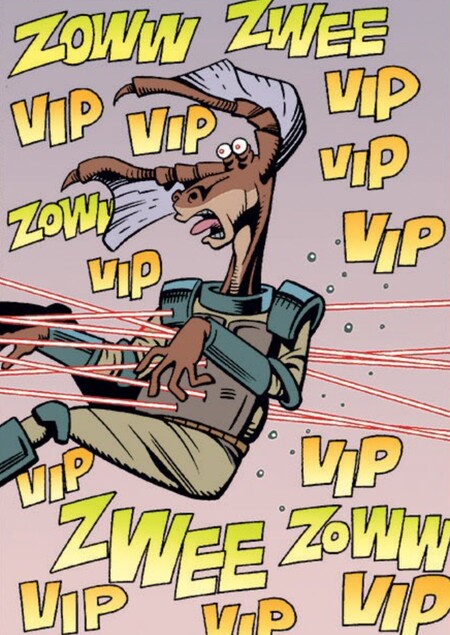 In ‘Revenge of the Sith’, Jar Jar had a deleted scene in which Palpatine, before being proclaimed emperor, thanks him for putting him in that situation, but they decided to cut it so as not to further stoke the sleeping rage. In the movie barely comes out, just at Amidala’s funeral and a few more scenes, with no dialogue. Enough to calm down.

The prequels went, little by little, to the repository of popular culture, and Jar Jar to oblivion … Until, in 2008, a series gave him back part of his lost dignity: ‘Clone Wars’, where he fights for the Republic and becomes a war hero. George Lucas wanted to rehabilitate Jar Jar Binks and the series gave him action scenes, a more attractive personality and even a love interest. And fans complained less and less about his appearances.

Not that the hatred of Jar Jar was part of the past: unofficially, he appeared trapped in carbonite in the game ‘The Power of the Force’, danced the “Gangnam style” in ‘Clone Wars Adventures’ under the name “Gungan style”, exploded in ‘LEGO Star Wars: The Padawan Menace’, was a bird named Jar Jar Wings in ‘Angry Birds Star Wars II’ and even had a son, Abso Bar Binks, in the manga ‘Star Wars manga: Black’. 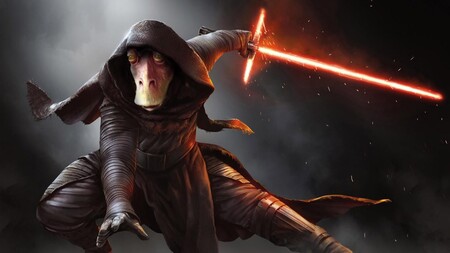 Furthermore, a fan theory (which Ahmed Best seemed to defend) said that he really was a sith lord all this time, something Lucasfilm denied. And isn’t that exactly what you want us to think …?

Ahmed Best was able to recover from the crash and he even got a second chance in the ‘Star Wars’ universe last year as Jedi Master Kelleran Beq in a children’s contest that can be seen on YouTube, ‘Jedi Temple Challenge’. He has made peace with the character that was to be his rise to fame and almost the end of his career.

‘Star Wars’ went ahead and while JJ Abrams hinted that Jar Jar would appear in the new trilogy (for more details, as a skeleton in the desert), he ultimately decided to put the past behind him, probably for the better.

And it is that the saga had destined an end for him. A worthy and at the same time unworthy ending, as it deserved after so many comings and goings. Chuck wendig was in charge of putting an end (for now) to the story of Jar Jar Binks, in the novel ‘Star Wars: Aftermath. The end of the empire ‘. 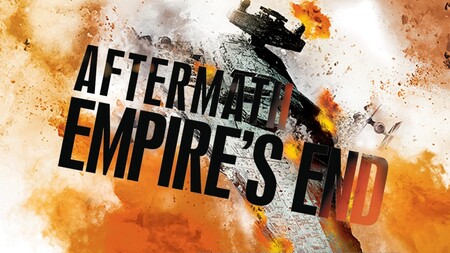 The novel, which is part of current canon, is not about Jar Jar, but about two pilots seeking revenge on Jakku after what happened in ‘Return of the Jedi’. And it is that, among the children terrified by the war in Naboo, there are a clown who juggles to get a smile. A Gungan hated by adults, who reproach him for having caused the rise of the empire, and at the same time adored by children.

Nobody acknowledges his existence and he was expelled a second time from his home planet. This is how he meets an orphan boy with a disfigured face whom he befriends … and who asks him if he can also learn to be a clown. 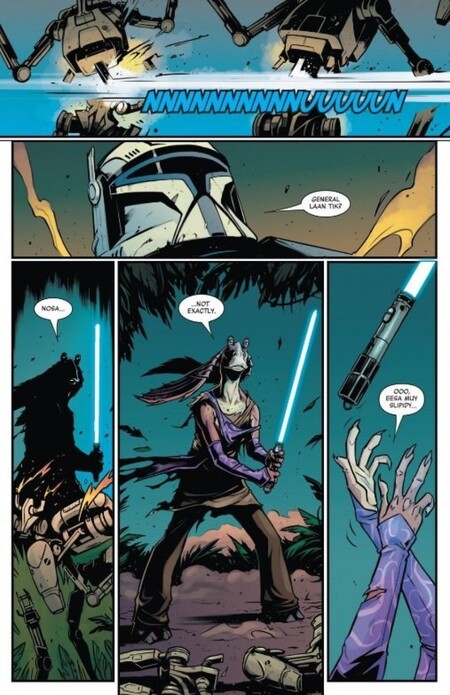 And you know what? It’s nice that Jar Jar found, in the end, peace both among fans and in the Star Wars universe itself. Was it worth the hatred at the beginning of the 21st century, or was it exaggerated by the Internet? Can we see him now, from a distance, as a harmless child character who made the biggest mistake in the history of the saga? In any case, on May 4, the day of Star Wars, there goes this tribute to a war hero, a clown and a useless good-natured. It goes for you, Jar Jar Binks.