‘Outlander’ is one of the many series that have been impacted by the coronavirus pandemic. Under normal conditions, we would most likely have already started to see your sixth season, but the truth is that we will still have to wait for yours to do so. Below you will find everything you know about the new installment of this Starz series.

Beware of spoilers for the fifth season in the following paragraphs.

The sixth season of ‘Outlander’ will be based on the novel ‘Wind and Ash’ by Diana Gabaldon, but it will not be a literal adaptation of the base material. A priori, one of the most anticipated aspects is to see how Claire will really be affected by the fact that she was beaten and raped by a group of men before being rescued by Jamie. She said herself that she couldn’t let that mark her, but obviously it will have some kind of effect on her way of being.

In addition, these new episodes of the series will have to delve deeper into other open plots such as the fact that Brianna discovered that the person who tried to sexually assault her is still alive and may still be trying to find her. It is already confirmed that they will be 12 new episodes, the same as the fifth.

Also, it is worth noting that Matthew B. Roberts, executive producer of ‘Outlander’, wanted to make it clear that this sixth season will continue to feature many intimate scenes, since “I didn’t want the team to have to change history because of the coronavirus“. 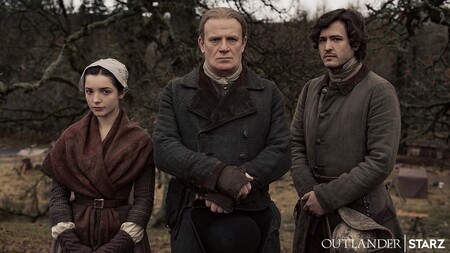 Jessica Reynolds, Alexander Vlahos and Mark Lewis Jones are the main additions to the cast of ‘Outlander’ in its sixth season, with the returns of Caitriona Balfe as Claire Randall Fraser, Sam heughan like Jamie Fraser, Richard Rankin as Roger Wakefield or Sophie skelton as Brianna Randall

We’re BACK !!@Outlander_STARZ Season 6 shooting!
Feel very fortunate to be working right now, production are ensuring everyone is safe and protected. Now just need to deal with the snow ….
⛄️ 🏴󠁧󠁢󠁳󠁣󠁴󠁿 pic.twitter.com/akKKUAz3Ik

Filming of the sixth season was scheduled to start in May last year, but the coronavirus pandemic forced a change in plans. Finally, filming began at early this past February, a fact confirmed by Heughan himself through his twitter account.

At the moment there is no other option but to wait – unless you too can travel back in time – but with filming already started, don’t be surprised that on the least expected day at least some kind of teaser appears. What we do have is a first look behind the scenes announcing that the recordings were already underway and that you have just above these lines.

Nor is anything known at the moment about when we will be able to see new episodes of ‘Outlander’, but the most common is that little less than a year passes between the start of filming and the premiere, so most likely we will have to wait until the end of 2021 or the beginning of 2022. Of course, the security measures against the coronavirus They could make the wait a bit longer than usual.

At the time, certain rumors arose regarding the possibility that the sixth season of the series could be the last, but Starz renewed ‘Outlander’ for a seventh season in March 2021, without also making any mention that the thing could stay there. In fact, the chain is interested in developing possible spin-offs …