’30 Coins ‘1×08’: an epic finale full of wild esoteric inventiveness that makes a second season a must

Alex de la Iglesia ends the first season of ’30 coins’ on HBO Spain with a sustained climax of an hour that closes the main arch of Vergara and the 30 coins of Judas, in a vibrant show so full of ideas and proposals that never seem to want to settle for mashing ideas from previous episodes, but to generate and open doors, expanding the occult universe of the series to infinity.

Actually, Episode 8 is a conclusion to a third act consisting of the last three episodes, or at least it seems the second half of the seventh, something that breaks the dynamics of the series a bit, with each one focused on some specific aspect, such as the first the monster children, the second the possessions, the third the cursed mirrors and the fourth a full-blown flashback. Let’s say the final coda is the great Carpenter movie of Alex de la Iglesia. 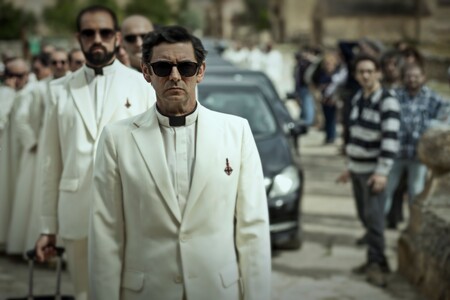 In episode 7 we had a collision from John Carpenter’s cinema (‘The Fog’, ‘The Prince of Darkness’) with details from ‘Operazione Paura’ (1967) from Mario bava and Stephen King stories as well as, of course, ‘The Mist’ (The Mist, 2007) or ‘The Storm of the Century’ (Storm of the Century, 1999), in this the evil goes directly to a new phase and we have as a result a strange structure.

On the one hand, we come from a cliffhanger in which we see Vergara like an angel from hell full of guns, and all that climax against evil is resolved in a confrontation with a “final monster” that could be located in the last minutes of the episode, but is resolved almost before the credits. The appearance will delight Lovecraft fans, as Satan’s form is basically Nyarlathotep, in an appearance that is somewhat tarnished by the difficulty of integrating the effect with the action of the actors. 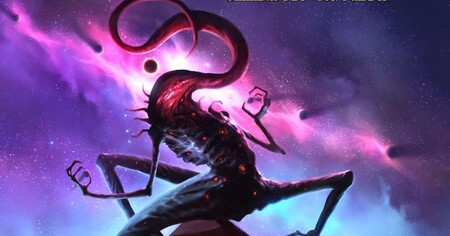 However, the moment works because of how strange it is to see Vergara shooting himself in one of the bodies that the monster has attached to it, Is the creature a specular amalgamation of “evil” reality, where did the first Vergara of episode 3 come from?? Questions in the air and the inexplicable is one of the things that make ‘30 coins‘such a unique and valuable event, the amount of information accumulated per episode is worthy of some entire seasons of other series.

From ‘Stories to not sleep’ to ’30 coins’: the 17 best horror series on Spanish television

The ways of dark magic that the villains and heroes of the series use is inexhaustible, as soon as we have Vergara walking through dreams to contact Elena, as soon as we have him doing an amazing ritual that carries the power of the three-eyed raven from ‘Game of Thrones’ to the terrain of eastern shamanism. When the episode takes shape, a kind of Iberian ‘Salem’s Lot’ with our heroes trying to operate clandestinely in the town that has already become a receptacle of evil., seems to do a skipping reboot two weeks later.

A climax of grand guignol and madness 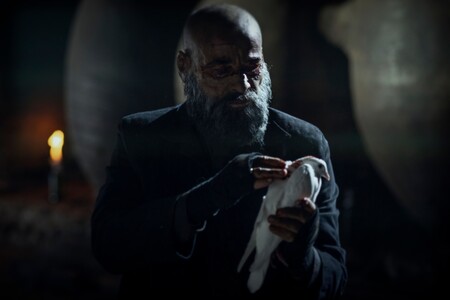 This creates an additional rush that does not quite sit well with a series that already has implicit overload, and this translates into a heart-stopping race against the clock, but leaves little time to resolve the approach for the next with a little more oxygen. That said, the arrival of the Vatican conspirators (in their own uniforms from The Grail of ‘Preacher’) is spectacular, with all the town turned into a diabolical spell of dead cattle, arcane symbols in blood and sixtin chapels of skinned ram’s heads. Few like De la Iglesia to draw a more infernal, impious and savage picture for a black mass.

Halloween: the 21 best horror series you can watch on Netflix, HBO, Amazon and Movistar +

A madness that is crowned with another monster and more caricatures, in that difficult balance of grotesque, grotesque comedy and action comic that the author of ‘The day of the beast’ (1995). Everything remains on the edge, with Vergara defenestrated, Elena bleeding to death as a result of magic and some characters fleeing after the relocation of the coins. There is much open and everything on an edge that makes it essential to see how it continues, at least a second season of the three that are in the director’s head.

‘30 coins‘tends to chaos at certain moments, with some details of run-over montage and some performances so histrionic that they take the comic book terrain to places of excess that collide with the more serious and disturbing tone of the series, whose visual finish is sometimes rough, but that compensates for the amount of ideas, frenetic pace and intensity without concessions, although the best moments are those that he dedicates to dissecting his mythology, challenging the known and giving an explanation to the great tyrants of history. A fresco of overflowing imagination and epic ambition without excuses or detours. An imperfect gift but one that leaves us wanting much more.

’30 Coins ‘1×08’: an epic finale full of wild esoteric inventiveness that makes a second season a must

was originally published in

The endless story of Final Fantasy VII: from Dirge of Cerberus and Crisis Core to the future Battle Royale The First Soldier in 2021

EA will leave the future of its sagas in the hands of its studies: although the fans play their role

When will episode 6 of season 3 of Legacies be released?

What will happen next week in Plus belle la vie? (SPOILERS)