‘Saint Maud’: a powerful Catholic horror drama, ideal for the most important dates of the worst year of our lives

Presented in Toronto and awarded the Gérardmer Fantastic Film Festival Grand Prize earlier this year, ‘Saint Maud’ finally hits our screens. The movie of Rose glass lands on December 23 with homework done, recognition it deserves and the usual perennial controversy around the new horror cinema.

The British Rose Glass, a seasoned veteran in the field of short film, continues to insist that a picture is worth a thousand words, and after a series of works where there was hardly room for the power of the word, she is thrown headlong into psychological horror with a formally flawless first feature film. Filled with symbolism and excellent staging decisions, ‘Saint Maud’ has enough pillars to withstand the Catholic wiggle it proposes. The brutal interpretation of Morfydd Clark, increasingly visible on our screens and part of Amazon’s ambitious proposal for ‘The Lord of the Rings’, is his main powerhouse. The actress grabs by the wings a role with much to lose to dignify the calvary of his character.

Maud, a young nurse, moves into the lavish mansion of Amanda, a veteran and famous dancer weakened by a locked-in illness. Maud, tormented by a terrible secret and by the messages that she thinks she receives directly from God, convinces herself that she must fulfill a mission: save amanda’s soul From the demonic claws that hold his new patient.

With the horror cinema more present than ever, available to everyone and with more and more followers, it is normal that the codes of the genre must gradually modify their patterns. Although in reality, as with clothing, many still pay attention to the brand on the label. A24 has been in charge of distributing ‘Saint Maud’ in the United States, which makes it, in the eyes of the general public, “another film from the label that brought us reinventions like those of Ari Aster or Robert Eggers”. Well, that’s the first mistake: ‘Saint Maud’ is only a small independent British film, not the new production of the posh (and big commercial eye) based in Manhattan.

But let’s focus on a movie that has more than one and two images that will stay in your head for a season. For this we have spoken with the director. “I had the visual identity very clear in my head from the writing process, so I suppose that is why it may seem that I focus more on it, but I think the rest of the elements help to find a balance“.

The melodrama and black humor of the films of the sixties and seventies about psychological breakdowns, the visual power of the cinema of Nicolas Roeg or Roman Polanski and a couple of brushstrokes of the body horror most recognizable form the main gear of the Glass film. All these references, visible and necessary, do not prevent me from also offering other much more classic aftertastesuch as Maud’s ascension to the “castle” where she will encounter an evil manifestation to purge. “That location appeared well into production, looking for locations. Someone mentioned it, I saw it and I changed the whole part that I had written about it. That house on the hill gave us the opportunity to play a little more with the classicism of the genre and to venture towards something more recognizable, to play with the expectations of the viewer, to show something that could hide a terrible secret inside“. 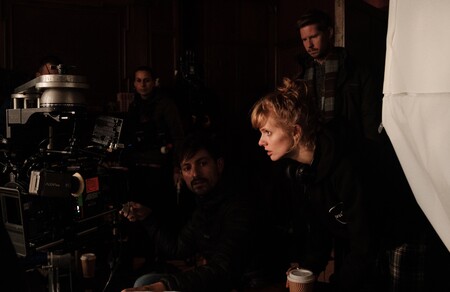 That bodily horror that I mentioned earlier is here related to the sinner’s guilt and self-punishment. A fanaticism that can do as much damage outside as inside the body. “Think it is so. Mutilations, self-punishment … all of this exists in the real world, but it is not always related to religion. I think it is something intimately linked to the human being“. ‘Saint Maud’ would not be what it is without amazing performance by Morfydd Clark, owner and mistress of the show and a casting choice that makes everyone involved great. “When Morfydd arrived he did a very simple, very basic test, but it was like wow, that’s it, we have it. But until that moment came we went through a very long and exhausting process. We started casting about a year before filming began, but we couldn’t find our protagonist“.

Glass’s film combines the most recognizable iconography of the golden age of Catholic terror with the modernity of the staging and the new tics of the genre of the last five years, and although its director it seems that she will not repeat genre in her next work , his references when facing his groundbreaking debut are clear. “I am not an expert in the genre and I’m sure I have many gaps, but I can tell you that my favorite movie is’The seed of the devil‘. Also ‘Repulsion’ and ‘The chimerical tenant‘, movies that are not 100% horror, but I am passionate about them. Also ‘The demons’, from Ken russell, or the cinema of Cronenberg“.

The truth is that with the year that we have passed, a film like ‘Saint Maud’ can be the ideal culmination of a 2020 to forget, just under ninety minutes of classic modernized horror, where Adam Janota Bzowski’s soundtrack shines as bright as the neat dirt that permeates Ben Fordesman’s photography. Both, as the director of the film, in her first feature film. A bit of fresh air within a current that lately needed a film with such a powerful closure and that somehow places it more in the vein of titles like Kevin Smith’s ‘Red State’ than of the groundbreaking ‘Hereditary’ : “I was very clear from the beginning that the film had to end like this“. Amen.

All the Movistar + premieres in February 2021: season 2 of ‘Hierro’, ‘SuperAgente Makey’, ‘Becky’ and more

All HBO premieres in January 2021: the new Batwoman arrives, the second special of ‘Euphoria’, ‘Batman v Superman’ and more