No Result
View All Result
NEWSLETTER

This signal comes every 157 days from deep space: Astronomers are unclear why

by admin
in space
0

This signal comes every 157 days from deep space: Astronomers are unclear why

Billions of light years from Earth there is something emitting radio signals that are received on Earth. This is not as strange as it may seem at first glance, but that these signals always come every 157 days . In fact, there is only one other case in which the signals are periodic and in both situations astronomers are not clear why it occurs .

These are fast radio bursts (FRBs) , signals that astronomers have been capturing for years, but without knowing exactly why they occur in space. Rapid radio bursts are flashes of light that last only a few milliseconds but unleash as much energy at this time as our Sun a century. The first time a FRB was detected was in 2007 and since then more than 100 have been discovered. Its origin remains a mystery .

Of the more than 100 FRBs discovered so far, only this and one more are periodic . All the others have been registered once and that’s it, so it is understood that they are due to an explosion that occurred in space at some point in the Universe. But if the signal occurs again following the same pattern every 157 days … it cannot simply be an explosion. There are theories of all kinds, from another star interfering in the continuous signal to modulate its periodicity, to more extravagant ideas .

Previously, in February of this same year, astronomers discovered a signal that arrived every 16 days . Specifically, it was recorded for 4 days and 12 days there was no trace of it . The options that are considered to explain this specific burst is that the star that emits it is orbiting a black hole that traps the signal for 12 days, or that it is a binary star system where the largest one traps the signals of the small one for 12 days. Everything revolves around the idea that something stands between us and the signal for 12 days due to the orbit of the object that emits it. 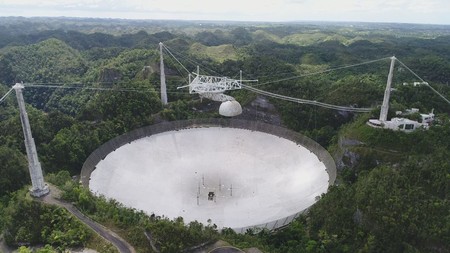 Arecibo Observatory, due to its magnitgud, is one of the most used to capture FRB

The new fast radio burst that is constantly repeated every 157 has been named FRB 121102 and was first recorded in 2012 by the Arecibo radio telescope in Puerto Rico. Since then, researchers have been studying it for more than five years to confirm now that it is a periodic FRB that arrives every 157 days.

Exemplification of how a set of binary stars could cause the signal to periodically arrive. Via Kristi Mickaliger.

The theory is that the signal arrives for about 90 days and then there is silence for about 67 days , thus completing a cycle of 157 days. Apart from Arecibo in Puerto Rico, other facilities have also managed to capture the signal during these years, including the gigantic new FAST telescope in China .

The new cycle is about to start again this week, the researchers hope that studying this fast radio burst can help better understand this cosmic phenomenon from deep space.

At the basilica of Saint-Denis, participatory workshops before reassembling the spire

PSG: Inter Milan explains the drop in the price of Mauro Icardi’s transfer