No Result
View All Result
NEWSLETTER

The idea of ​​reusable space rockets came up before the moon: SASSTO, the great-grandfather of the Falcon 9

by admin
in Technology
0

In recent years, especially the past, we have seen a certain boom in VTOLs ( Vertical Take-Off and Landing ) in an attempt to create flying taxis that can become an alternative to today’s cars. But VTOLs have been designed for decades, not only to travel a few kilometers, but also to save money when traveling to space .

An example of these is the SASSTO, an original vehicle designed with something like a reusable space taxi as a simple and cheap alternative to what was being done. He was raised in full effervescence space when the United States tried to give strides to overtake Russia in this growing career focusing on multi – stage rockets like the Saturn V .

SASSTO refers exactly to Saturn Application Single Stage to Orbit , something like “Saturn Application for Orbit in a Single Stage”, and it came from the mind of Philip Bono , an aerospace engineer specializing in structures and propulsion that in 1947, just after After finishing university, he began working at North America Aviation, a defunct aerospace vehicle manufacturing company like the future Saturn V, which in turn was Boeing’s prime stock .Philip Bono thought that a single-phase, vertical take-off and landing vehicle could compensate financially

After a few years and with the space race already somewhat more mature, Bono was already seduced by the idea of ​​reusable space vehicles. In fact, Andrew J. Butrica calls him a “dreamer” in his book Single Stage to Orbit: Politics, Space Technology, and the Quest for Reusable Rocketry , speaking of him in Chapter 5, titled “Space Visionaries.”

On this basis, and around cost savings, he thought that in the meantime a multi-phase rocket (like the Saturn V) a single-phase, vertical take-off and landing vehicle could pay off. In 1969, the year that the human being stepped on the Moon , he published Frontiers of Space , a work that includes explanations and beautiful illustrations from SASSTO.

Very nice and cheap, but it has no wings!

The aerospace engineer participated in a series of studies aimed at determining whether the cost of manned ballistic vehicles with vertical take-off and landing was competitive compared to one with vertical take-off and horizontal landing (which would be done by subsequent shuttles ). Part of it germinated in this vehicle, designed to carry a payload of 2,812 kilograms and have a total mass of 97,887 kilograms.

The idea was to position the liquid oxygen tank at the bottom to minimize the difference between the center of aerodynamic pressure and the center of gravity. The diameter would be 6.71 meters and would have a total length of 19 meters , with a push force at takeoff of 1,232.2 kilonewtons.

If materialized, SASSTO would have orbited 185 kilometers, being able to load up to 3,629 kilograms, thinking of a Gemini program ship (precursor of Apollo) with two crew members and a maximum stay of 48 hours . 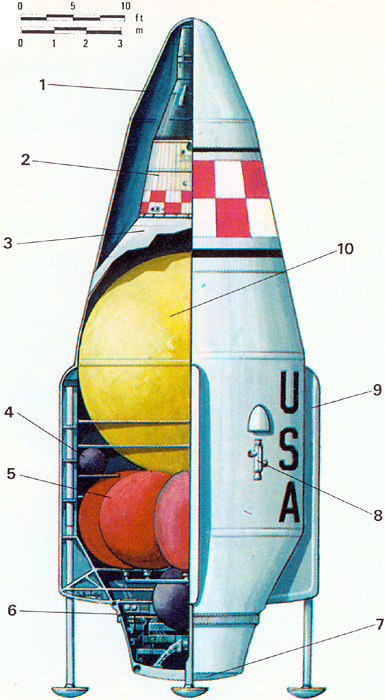 SASSTO costs were compared with two other horizontal landing models, although no attempt was made to abide by the estimate of marginal landing costs due to too many unknown factors (and here SASSTO would compensate by not needing a runway as such). The estimated cost of SASSTO rose to $ 1.1 billion (at the moment), while the other two would cost between 50% and 2.2 times more , but it was calculated that in the long run it would be advisable to opt for more complex, heavy and wings thinking about bigger loads and better handling.

Thus, although cost analyzes gave reusable, wingless vehicles like the SASSTO an advantage, the advantage seemed to diminish under heavy loads. Although according to Butrica, Bono’s feeling was that the biggest objection to SASSTO was not so much technical, but psychological .

Interestingly enough, the evolution of space vehicles seems to prove Bono right, now that the era of shuttles has ended decades ago and reuse seems to be making more and more sense. We have current and recent examples such as the first stage of SpaceX’s Falcon 9 that has been reused five times . It is not a single-stage rocket, but in a way it seems that after all Bono’s ideas other “dreamers” are being applied.